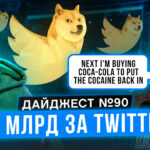 And now for the 90th traditional crypto news digest, from which you will learn why the founder of Aave got banned on Twitter and why the number 43 will cost Elon Musk money. Elon Musk bought Twitter Now it is the first social network owned by a private person The richest man on the planet bought Twitter. Elon Musk reached an agreement with the board of directors, only formalities remained – to receive […]