Each of us has heard more than once or twice about stock market crises, financial crashes, governments of various countries are trying to avoid such phenomena, and people are terribly afraid of losing their money. How to avoid similar situations in the future? Is everything so bad?

What is a stock market crisis?

Black Friday in the US – the strongest stock market crash

To understand in more detail the cause-and-effect relationships of the stock market crisis, we will be helped by the world’s first stock market crisis of 1857 (the first in the classical sense of the word, since there were crises before it, for example, Tulip Mania in the Netherlands). In the years leading up to this crisis, the US economy was actively developing: enterprises took out loans for further development, and banks, in turn, actively issued them.

However, the increase in production capacity and the attraction of additional labor capital led to an increase in supply, and this, in turn, inevitably led to a decrease in prices (these events are fully consistent with the basic economic concepts formulated by John Keynes). As a result of falling prices, many companies lost money and went bankrupt, and since most loans were not secured, banks could not get anything from enterprises and also lost money.

Banks could not return the money to people who opened deposits in them, and were also declared bankrupt. In the current situation, more than 200 banks in the United States closed in 1.5 months, people lost confidence in them and tried to get money back from banks that were still working. Thus, even banks that had a competent credit policy were under attack. Since no bank keeps all the money invested in it in its account, the banks could not cope with their “new” obligations and also closed.
Since by that time international investment projects had already been actively developed, people outside the United States who invested in American banks or enterprises also lost their money. England was hit first, followed by Germany. In these countries, the damage was done not only to the financial sector, but also to the real one, which, due to the events described above, could not fully receive loans for development and return the money invested. Thus, the “overheating” of the economy in the United States ultimately caused a decline in the economy and living standards in most of the economically developed world by that time.

If we remove the details from the above example and leave only causal relationships, then it is easy to notice the following patterns: during the recovery of the economy, for its further growth, large volumes of lending are required, which begin to be issued without collateral, as a result, there is a glut of the market with products, and then an avalanche. collapse of enterprises (from the real sector to the banking sector and back to the real one). There are also options in which lending does not play a special role and there is a banal oversaturation of markets, which in the future also leads to bankruptcy of companies and an economic downturn.

Bubble in the stock market

However, the option of a major collapse of the securities market is possible without its oversaturation. This happens for the simple reason that all people simply want to make money, but simply do not consider possible risks. So, for example, during the growth of the economy, stock prices rise (due to technological progress or an increase in demand), therefore, people who own shares begin to earn. People who did not have stocks at that time begin to feel that they are missing out on earning opportunities, and they also begin to invest in stocks, increasing demand, and therefore the price. This, in turn, generates further interest from other people and even more growth in the stock. In the current situation, wanting to make money, people who are completely unaware of the structure of the stock market are included in the game on the stock exchange, and people who have the proper knowledge often stop thinking rationally in the face of large earnings.

Thus, there is a significant revaluation of the value of many shares (a situation in which the shares of companies are worth significantly more than they can bring in money). At a certain point, when it is no longer possible to inject money into shares, demand for them falls, growth stops, people who want to take profits tend to sell shares, which causes a situation in which supply exceeds demand, and therefore prices begin to decline slowly at first, and then like an avalanche. This situation is not as dangerous as a glut of the economy, however, people lose not only money, but also confidence in the stock exchange, which means that subsequently companies do not receive the necessary investment capital (which under normal conditions they could get by issuing bonds, but after a major market crash, for a certain time, a very small number of people will want to continue investing, which means that demand and prices for bonds will decrease, and therefore the amount of funds raised by firms), which will slow down the pace of economic development. 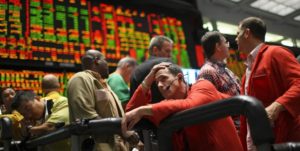 Crash in the stock markets and panic of participants

In the above arguments, the concepts of “stock market crisis” and “economic recession” were identified, which is true in most cases, but not in all. An example is October 19, 1987, when the Dow Jones fell 22.6%. The main version of such a fall is an error in computer programs for trading, which then became widespread. It is assumed that after a long rise, computers reacted too pessimistically to a slight drop in the index and began to en masse give orders to sell shares, which caused an avalanche-like decline in prices. However, this example was not accidentally mentioned as a kind of exception – the very next day the index rose by 12%, and there was no mass layoff of workers, this may indicate that the error of computers, or rather, people setting them up, without a corresponding overheating The economy has not been able to cause its recession.

Governments of different countries after the very first financial crises began to take various measures to prevent new “failures”. Today, in our country, we can see a rather tight control of the Central Bank over private banks and credit organizations so that they cannot “inflate” another “bubble”. This system, in addition to frequent audits, includes the so-called system of required reserves, according to this system, the Central Bank establishes a minimum rate of funds (reserves), expressed as a percentage of the total amount of accepted deposits, which banks are required to constantly have in their account, this makes the behavior of banks less aggressive and their position more secure.

There is also a system of compulsory deposit insurance, according to which, in the event of a bank failure, any individual can receive a refund of the deposit made in it and accrued interest in the amount of up to 1.4 million rubles. This measure serves, firstly, as an incentive for people who do not trust banks and therefore keep money “under the pillow” (the transfer of such money to the bank will improve the velocity of money circulation), and secondly, this measure should prevent panic among people in case of bankruptcy of one from banks, thereby protecting other banks from the need for a massive return of deposits.

In the hands of the Central Bank there is another powerful instrument of the so-called monetary policy – the key rate. It is at this rate that the Central Bank lends money to private banks, which means that rates for consumer loans and loans to various organizations are formed on its basis. By lowering the key rate, the Central Bank makes investments more “cheap”, respectively, when it increases, investments “get more expensive”. Thus, the Central Bank can influence the country’s economy: stimulate or, conversely, “cool” it, protecting it from new economic bubbles.

In my opinion, the system of progressive taxes actively implemented in Europe deserves special attention. Under this system, a citizen’s higher income is subject to a higher tax. This means that with economic growth, and hence the growth of incomes of citizens, they will begin to pay more taxes and their income will grow more slowly, as a result of which it will be possible to avoid market saturation or suspend it. Since the government can use the money raised from higher tax collections during an economic recovery to stimulate the economy at the time of its recession, such a system can significantly smooth out the phases of the economic cycle. Such a policy of regulating economic phases is called fiscal, and it is less common than monetary.

However, despite all the efforts of the governments of different countries, we can observe stock market crises for over 150 years (the US economic crisis of 1857, the Great Depression, the dot-com bubble, the 2008 crisis, etc.). But, in my opinion, in addition to the obvious losses to society from such economic collapses, they also have advantages: opportunities for earning money and cleansing the economy of underperforming companies. In terms of opportunities, everything is quite obvious: people who have cash can use it as collateral to short certain stocks or simply buy shares of this or that company in a strong fall in the hope of future growth, because as in during economic growth, company shares are overestimated, just as during a crisis, company shares are often undervalued. So, for example, during the crisis of 2008, Sberbank shares cost 14 rubles apiece, a year later they rose to 100 rubles, and at the moment one ordinary share of Sberbank costs 250 rubles. Of course, playing on the stock exchange requires special knowledge and skills, but be that as it may, it is during the financial crisis that investors have opportunities that one can only dream of in everyday life.

With regard to the cleansing of the industry from inefficient companies, it is rather difficult to find an example, due to the fact that it is very difficult to develop and apply a single principle for assessing the effectiveness of a company. But it is quite logical that companies with a large margin of safety, as well as a more competent development and work strategy, will remain in the industry, unlike companies with certain problems. For society, there are also pluses from such a cleansing from an overabundance of product: resources that were previously directed to the production of excess, that is, excess and unnecessary products, will now be distributed among industries in which demand is not sufficiently satisfied.

In conclusion of the discussions presented above, I would like to say that, despite the presence of pluses, exchange crises, in my opinion, have much more significant minuses (if a large number of the population lose their jobs, strikes or even overthrow of the government may begin, and the economy will be cleansed of inefficient enterprises and itself, albeit more slowly), and therefore the authorities, with the help of a combination of monetary and fiscal policy, must prevent global crises, but if they do occur, people should remember that crises also have an important, and most importantly, useful function of clearing the market.

Coincub has updated the rating of crypto-friendly countries


Russian AI can do things that the US and China never dreamed of.